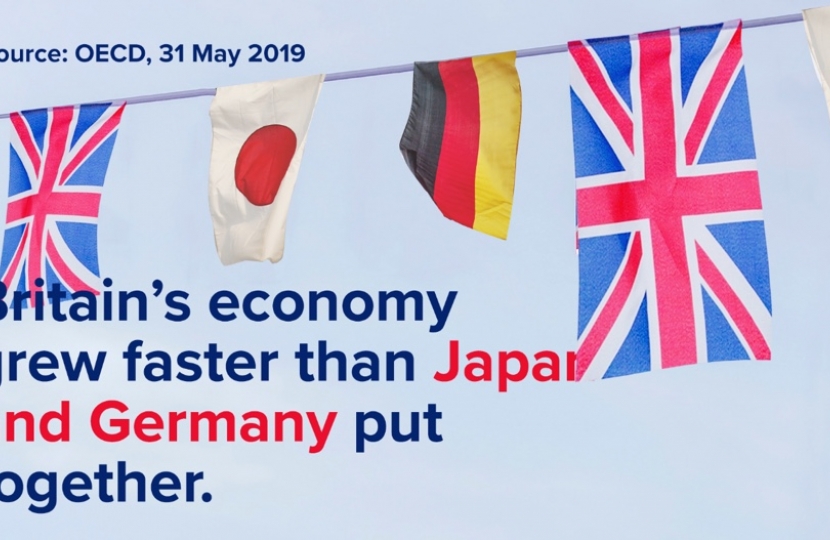 The UK economy continues to grow under the Conservatives. GDP has grown for nine years straight, debt is falling, wages are rising, and going forward as a nation, we once again have genuine choices. Here are nine great facts about the UK economy in 2019.

Employment is at a record high.

Unemployment has fallen to its lowest rate since the 1970s, as more and more people are getting into work. By lowering tax and making sure the welfare system rewards work, more than 3.67 million people have been able to find work since 2010. This means more people have the security of a regular wage.

We are getting debt falling.

The more debt we are in, the less secure our future will be. That’s why we are focused on reducing the debt, so we spend less money on debt interest repayments and so we can pass on a healthier economy to the next generation. That’s why we are proud that, under a Conservative government, debt is forecasted to have its first sustainable fall in a generation from a peak of 85.1% of GDP in 2016-17 to 73.0% in 2023-24. That means borrowing is down to the lowest level for 17 years and will continue to fall under our care for years to come, providing our economy with a solid foundation for future growth.

We are tackling tax avoidance.

To help protect the UK economy, we have introduced over a hundred measures to crack down on tax avoidance, evasion, and aggressive tax planning helping to secure £200 billion in tax revenue that would have otherwise gone unpaid. As a result, the tax gap – the difference between the amount of tax collected by the government and the amount the government expects to receive – has reached a near record low of 5.7%. And we’re not stopping there – we are introducing a further 21 measures which are forecast to raise around £2.1 billion more in receipts by 2023-2024, to combat non-compliance in all its forms. Tackling tax avoidance has meant more money is available to pay for police officers on the streets and local services in your area.

We have cut tax for 32 million people.

Ending austerity is not just about funding public services – it is about real wage growth and it’s about leaving more of people’s hard-earned money in their pockets. Under the Conservatives we have increased the amount you can earn before you start paying tax giving 32 million people a tax cut and taking almost two million out of paying income tax altogether – a typical basic rate taxpayer will pay £130 less tax than in 2018-19. We’ve also taken action giving the National Living Wage its biggest ever increase this year, and we’ll continue to cut tax – in 2020, personal allowance will rise from £12,500, meaning more money in your pocket with every pay packet.

Record number of women in work.

Since 2010 there are a record number of women in work – over 1.79 million more since 2010. The Conservative government has been focused on reducing disparities between pay and employment rates of men and women. This has meant Britain’s economy has remained robust and fair with the Conservatives.

We are investing in productivity and business.

We have invested in British businesses, communities, and our national infrastructure through our £37 billion National Productivity Investment Fund and given our health service its biggest cash boost in history as part of our long term plan for the NHS. As a result, over the next five years total public investment will grow by 30% to its highest sustained level in 40 years. On average, this will be an astonishing £460 million a week higher, in real terms, than under the last Labour Government. This is a Conservative government investing in the roads, the railways, the research and the digital infrastructure that will power this country in the 21st century.

The economy has had the longest quarterly growth of any G7 nation.

For nine consecutive years, the UK economy has been growing, meaning more businesses creating good jobs and paying taxes so there’s more money for public services. In the first quarter of 2019, Britain’s economy grew more than Japan and Germany put together, and since 2010 the UK economy has grown by over 18 percent. The UK economy remains strong, and we will invest at record levels in our infrastructure and skills to ensure Britain is well placed to seize the opportunities that lie ahead.

Not only is unemployment falling to record low levels, but youth unemployment has fallen dramatically. Under the Conservatives, there are 472,000 fewer young people out of work – halving since 2010. That means more young people in work, developing skills and earning an income than any time this decade.

We have set out our modern Industrial Strategy.

It is crucial that this country has a modern Industrial Strategy devoted to helping the country invest in infrastructure, supercharge our research spending, and boost the skills of our work force. That’s why we are devoting more resources than ever to help secure the UK’s world leading position in industries like artificial intelligence, nuclear fusion, and quantum computing.

Each of these statistics represents something fantastic because, behind all these national figures, there are thousands of stories of individual people and small businesses whose economic circumstances have been vastly improved from lower tax and better public services. If you want to know more, why not work out how much income tax the Conservatives have saved you? Try our income tax calculator to learn more.