Conservative Councillors for Barnes have sent letters to both the Mayor of London and the Department for Transport asking for collaborative working to repair Hammersmith Bridge and for urgent progress to build a temporary crossing . 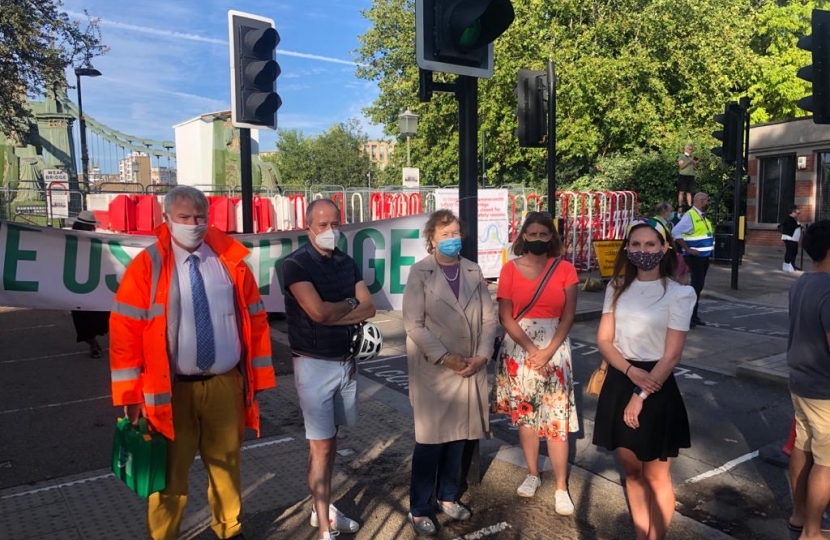 Conservative Councillors for Barnes have sent letters to both the Mayor of London and the Department for Transport asking for collaborative working to repair Hammersmith Bridge and for urgent progress to build a temporary crossing .

Cllr Paul Hodgins, leader of the Conservative Group on Richmond Council, stated, "There is enormous confusion about the roles and responsibilities of the two local authorities, Hammersmith & Fulham Council and Richmond Council, as well as Transport for London, and the Department for Transport in progressing the works on Hammersmith Bridge. This problem with Hammersmith Bridge was not caused by Covid-19. It has been known for at least four years that the bridge needed to close for repairs. When Conservative Councillors were in charge of Richmond Council, we wanted control of the bridge to avoid this political delay and resulting chaos.

"Nevertheless, we are now in this position. This is not just a problem of money. The main problem is a lack of political leadership locally, in the commitment to move the repairs forward and to find solutions with the required urgency. The Government has a role to play now because of the impact of Covid, of course, but local authorities need to continue to play their roles. They cannot just stand around pointing fingers, given a situation they created, without presenting a tangible way forward.

"So we as Barnes Councillors are asking for a commitment from both Transport for London and the Government to work positively together to move the repairs to Hammersmith Bridge forward urgently. We ask them to address three key issues:

"A lack of local political leadership has got us here. We now need Transport for London and the Government to work together in their respective roles to fix this mess. It is the only way forward."