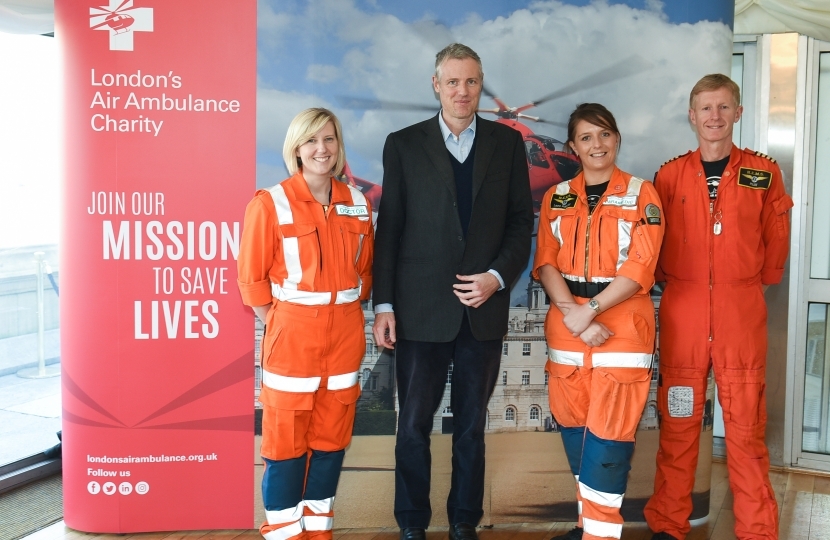 Zac Goldsmith, MP for Richmond Park, has joined politicians from across London to pledge to support London’s Air Ambulance Charity, the service that delivers rapid response and cutting-edge care to save lives in the city, at their 30th Anniversary Reception.

The charity also used the event to release their 2018 mission statistics, which showed that the medical teams treated 37 critically injured patients in Mr Goldsmith’s constituency of Richmond Park.

MPs and GLA members gathered in Parliament to mark the charity’s birthday.  In 2019 the service marks its 30th anniversary with the support of HRH The Duke of Cambridge who is Patron of their 30 Years Saving Lives campaign.  The campaign aims to highlight the charity’s vital work in delivering life-saving treatment across London, and raise support for the development of new facilities.  Providing the 24/7 service for London costs £10 million per year, of which nearly £8million has to be raised through donations

The event in Parliament, hosted by Tooting MP Dr Rosena Allin-Khan, gave Mr Goldsmith and other attendees the opportunity to meet the charity’s operational staff, including doctors, pilots and paramedics, and some of the service’s former patients. The team also performed a practical demonstration of a thoracotomy (open heart surgery) just one of the life-saving procedures the charity is able to perform on-scene in time-critical situations.

“With our annual costs at £10 million, and an ambitious vision to save even more lives, we have never been more reliant on the generosity of London.   We are so grateful for all the support shown by London’s politicians over the years, and would like to say thank you to everyone who attended this special reception.  I urge people to continue to support our charity as we mark 30 Years Saving Lives in the capital.  Your help allows us to be there for those who need us most.”

Zac Goldsmith said; “In 2018 London’s Air Ambulance Charity treated 37 patients in my constituency. I have seen them in action, and it truly is a phenomenally important and valuable charity. It deserves our support.”

London’s Air Ambulance Charity was founded in 1989 to provide on-scene care and prevent unnecessary deaths from serious injury in the capital. Treating an average of five patients every day, the service brings procedures normally only found in the hospital to the scene of the incident in life-threatening situations. In 2018, the charity brought this advanced care to 1656 patients across London.

I’m Amanda Milling – MP for Cannock Chase and the new Co-Chairman of the Conservative Party. My job is to help to deliver on the people’s priorities.