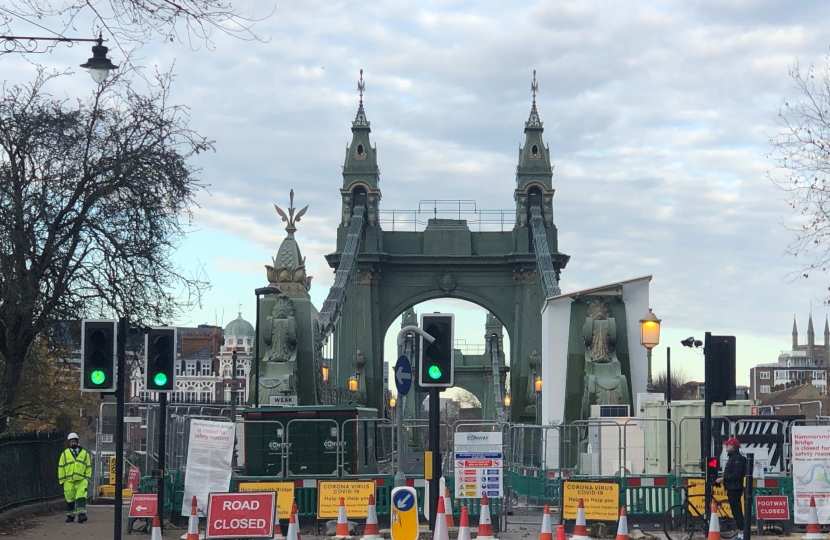 Hammersmith & Fulham Council’s recently revealed proposals for Hammersmith Bridge, the Ritblat/Foster bridge solution, that include part financing through a toll and putting the bridge into a charitable trust, finally provide the basis for developing detailed plans. But they also reveal how much time has been wasted.

H&F Council have completed the feasibility study for a temporary double decker bridge that could open Hammersmith bridge to pedestrians, cyclists and motor vehicle traffic in 2022. Works to repair and strengthen the existing bridge could then be carried out partially off-site and potentially to a quicker timeframe than that set out in existing proposals developed by TfL. The study’s conclusion is that the proposal is feasible, but it should be noted that more detailed work is needed before these proposals form part of a final project plan and business case.

H&F Council is also proposing to transfer ownership of the bridge to a charitable trust, similar to the City of London’s Bridge House Estates Trust which runs Tower Bridge. It is not clear to what extent these proposals have been fully developed and any impact on the timeline for repair will need to be carefully considered.  The council proposes that its share of the cost of repair would be met by a toll on motor vehicles, floated at around £3 per crossing.

Cllr Paul Hodgins, councillor for Barnes and Leader of the Conservative Group on Richmond Council, said, “On the positive side, if it is definitely feasible, this new outline proposal from H&F Council would finally, finally give us a route forward and recognises that motor vehicles, such as buses and emergency vehicles, need a route across the river as quickly as possible. It is clear that further development of the proposal and the new ownership structure needs to be carried out at pace; we have no time to waste.

“Certainly questions remain. Why did it take so long?  And why, when it was clear that previous plans would not meet the needs of motor vehicles, did H&F Council delay looking for an alternative? If this turns out not to be the solution, what is plan B? I have been asked by residents recently why the plans for a temporary bridge have been dropped.

“The council has wasted not months, but years. Four years ago, as is widely known, I recognised that H&F Council would continue to drag its feet and would end up having to be forced to do something.  I wrote to the Leader of H&F Council offering to take over control of the bridge and its resources when I was the Leader of Richmond Council. That request was declined.  There was always a way to devise a project plan and finance the bridge; H&F Council instead chose to play politics, first with TfL, and then with the DfT.

“This new proposal also exposes Richmond Council and Cllr Ehmann, the Lead Member for Transport, in repeatedly crying wolf by claiming every Richmond Borough household would get a bill for £800 if Richmond had control of the bridge. That was never going to happen. It was simply an excuse for inaction and passing the buck. Neither he nor Cllr Roberts, the leader of Richmond Council, has ever, to my knowledge, pressured or even asked H&F Council to get on with fixing the bridge. They have only ever been interested in protesting against the Government, for their own political purposes.

“Meanwhile, we estimate that our residents and businesses are paying conservatively £2m per month, at the very least, out of their own pockets in direct extra costs because of that inaction. The cost of this incompetence has been incredible.

“We must now move forward quickly to action. Subject to the details being worked through over the next few weeks, we can get a way forward. Our residents desperately need us to work together on this. Let’s make a decision on a solution, and move forward.

“To that end, there are three things that need to happen now as a matter of urgency.

“The first is that all parties, including residents, need clarity on project ownership, and need to feel reassured that H&F Council will accept its lead responsibility to fix the bridge.

“We are all frustrated with the continued slow pace of progress. Through the existence of the Hammersmith Bridge Task Force, we have the forum that has broken the four year total deadlock. Progress has at least inched forward, and we now need that progress to rapidly accelerate. While Hammersmith Bridge has incredible importance to us in SW London, we need to realise that this task force is the exception. The Department for Transport is not intervening in such a way anywhere else in the country.

So we need to be clear that it remains the responsibility of H&F Council to lead the project forward, with the support committed from the DfT in providing access to engineers, legal and financial experts and a project director to help the council.

“The third action is that a realistic financing proposal needs to be put forward. While not ideal, I can support the proposal for a small toll as long as it is reasonable and is paid by residents on both sides of the bridge.  The £3 per journey proposal is ludicrously high, and quite obviously a negotiation ploy. It is not realistic and not where it will end up.

“To put it into context, £3 is more than the Dartford Crossing, which costs £2.50 to cross or £2 with an account. The Queen Elizabeth Bridge at Dartford Crossing opened in 1991 at a cost of £211m in today’s money, at a time when interest rates were 10-15%. Moreover, the crossing makes an enormous profit. It is claimed the reason the toll is as high as £2.50 is demand management, not financial sustainability. There are other bridges around the country with a toll that can be used as models, and we should look at lower monthly charges for local residents. Let’s get real and stop constantly playing political games.

“It is a myth that local governments have no money. In fact Richmond Council’s finances are relatively healthy at the moment given all the money that has come through from the Government for Covid and most recently to address the deficit in education funding. The council is planning to spend extra millions on Twickenham Riverside, while at the same time crying poor over the bridge. Interest rates are at record lows, and financing can be done over 50 or more years making even sizeable capital contributions entirely affordable.

“So much time has been wasted. But we can now see a way forward on the bridge. Let us see some leadership from those who were elected to provide it. Let’s get moving on this. Finally.”