Hammersmith & Fulham Play PR Games On Their Financial Contribution For Hammersmith Bridge; Richmond's LibDem Leadership Continue To Make Excuses For H&F Over Its Own Residents - Why? 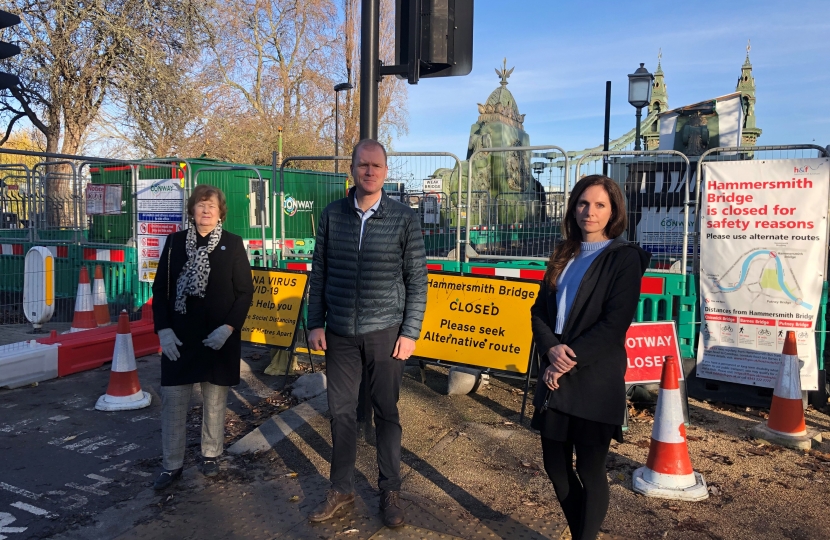 Calls are growing for Hammersmith & Fulham Council to get serious in its funding negotiations with the DfT. Agreeing the funding split is the main block on works moving forward and ending years of misery for Richmond Borough residents. This week a supposed split was leaked to the press, though the only proposal that has been made to the Government is that H&F will pay nothing at all.

Nevertheless, Richmond Council's LibDem Leader and Deputy Leader, who are supposed to represent Richmond residents, immediately took to Twitter, where they seem to spend all their time, to defend H&F and trumpet how much money they think their three year hands-off stance has saved the Council.

Cllr Paul Hodgins, Barnes Councillor and Leader of Richmond Borough's Conservative Group, said, "Here we sadly have more of the same total inaction we have had for three years. There was a leak to the papers to try to negotiate in public. It's a made up number that in the end is going to completely embarrass the LibDem leadership if H&F residents don't see their Council Tax double, which they obviously won't.

"In any case, no half-competent finance lead would pay for a major infrastructure project with a one time tax on residents, whatever the size. Apparently Richmond's LibDem Leader and Deputy Leader would, though. If there was leadership on the bridge, there are a number of innovative ways to finance bridge works over 50 or more years. Even a very small toll could pay for it, which would be less than what closure is costing residents every day, now.

"The fact is, over the last three years TfL alone have spent almost £15m without bridge works moving forward. H&F's spend would likely take that figure above £20m. That has been an enormous waste of money. On top of that Barnes, Mortlake, East Sheen, Kew, and Richmond residents and businesses are paying every day from their own pocket as a result of congestion, longer journeys, lost business, and poorer air quality. But the Leader of the Council and his Deputy don't have to pay for that, so they never acknowledge and don't appear to care about that cost.

"But the bigger question is, why do Richmond's LibDems refuse to hold Hammersmith & Fulham to account? They have never called on H&F to make a financial contribution. They have never asked H&F how much they receive yearly in consideration for owning the bridge. They have never asked for the detailed improvement plans. And yet, for all their support, H&F's leader didn't even inform Richmond's LibDems about the new Foster+Partners proposal until it was to be made public. Why won't Richmond Council stand up for its own residents, and itself?

"The answer is in a recent campaign leaflet from the Leader of Richmond Council, who happens to be running for the GLA in May. He included a chart showing that he had to hold onto every Labour vote the LibDems received in last year's election to have any hope of winning. The old message of only the LibDems can beat the Conservatives here. That message has been effective in Council and parliamentary elections. But it has failed miserably in GLA elections. So because of the LibDem Leader of Richmond Council's longshot GLA campaign, he only wants to criticise Conservatives and not Labour, and so our residents are being sold out on Hammersmith Bridge. He's letting H&F off the hook.

"But it will come back to bite. Residents are already asking, what is the point of having a Council that never takes any responsibility?"

Budget 2021: The Chancellor's Speech in Full

Read and Watch the Chancellor's Budget announcement here in full. One year ago, we promised the British people we would do whatever it takes to provide security and stability.