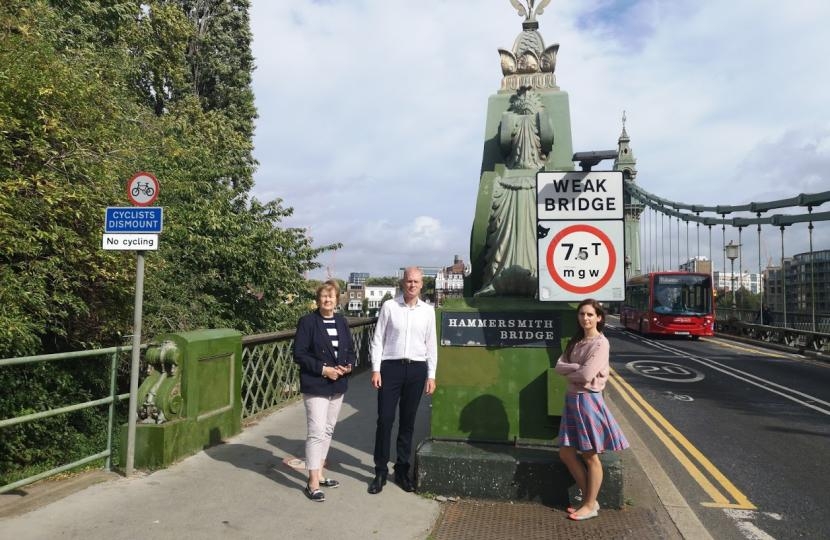 TfL have announced that after finding significant additional fracturing on Hammersmith bridge they have had to close the bridge to all crossings, including pedestrians and cyclists. Cllr Paul Hodgins, Leader of the Richmond Conservative Group and Cllr for Barnes, said, "This is a disaster. If this ban on crossing remains it will mean residents will be completely cut-off from reaching Hammersmith in a reasonable amount of time. What is most disappointing is yet again, we have Cllr Ehmann, the Liberal Democrat Deputy Leader and Lead on Transport at Richmond Council, taking a back seat, simply issuing a press release to take shots at the Government.

"This is a direct appeal to Cllr Ehmann. When I was Leader of the Council, I offered to take control of the bridge and its allocated resources, to give control to our residents. You got elected in 2018 because of your party's position on Brexit. You then immediately distanced the Council from taking any responsibility and any action over Hammersmith Bridge. You didn't want the responsibility. Look where we are now.

"Your residents desperately need action, and you have created no seat at the table for yourself. Please, on behalf of Richmond residents, it is time to show leadership, and get this process moving.

"The money was supposedly there for a temporary cycling and walking bridge. Let's get that moving now. With the excess millions alone that you are planning on spending on your party's plans for Twickenham Riverside, you could finance this temporary bridge now.

"A proposal was put forward by a highly respected marine engineer for a temporary bridge that could take emergency vehicles and cars. Put politics aside, and let's revisit that.

"Because of national politics in 2018, you were placed in a leadership position at Richmond Council. Time to show some leadership!"

Our Further Financial Support for Jobs and Businesses

We are announcing a package specifically for those businesses which are not forced to close, but face reduced demand due to additional social distancing restrictions.