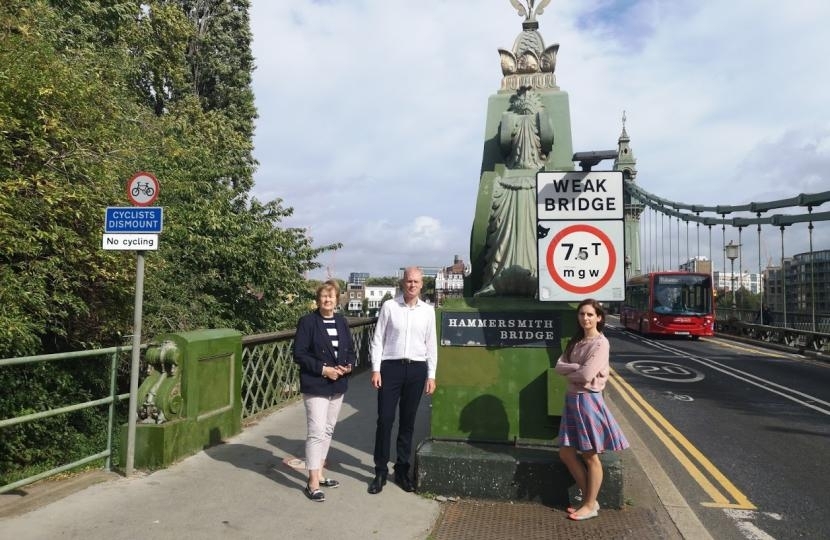 Last night, members of the Hammersmith Bridge Task Force, led by Baroness Vere, and including London Deputy Mayor Heidi Alexander, held a public meeting to discuss the status and progress of the plans for Hammersmith Bridge.

Amongst the revelations, it is now likely to take over six more years before the bridge will be fixed and reopened to traffic, despite promises two years ago that it would only take three. Moreover, Hammersmith & Fulham Council, despite having ownership of the bridge, refused to commit to any contribution, even for the temporary crossing.

Cllr Paul Hodgins, Leader of the Richmond Borough Conservative Group and councillor for Barnes, said, "It was great to hear Baroness Vere make absolutely clear the Government's commitment to funding the bridge repairs. But to progress, two obvious conditions must be met: there needs to be an actual costed plan for the bridge repairs and a temporary crossing; and there must be a local contribution by the owning Council as the DfT requires for any local project.

"It is unbelievable that after all this time there is still no costed plan, and Hammersmith & Fulham refuses to make any contribution. This is despite all the money they have received over the years, and their enormous development receipts from the Community Infrastructure Levy. They won't even commit to funding their part of a temporary crossing.

"I'm pleased that at least our own Council, following our motion at the last Council meeting asking the Council to make a contribution, has agreed to fund the ferry landing on the Barnes side. I wish they would have been proactive much earlier in trying to solve the temporary crossing. But we made the motion in Council because making a contribution to help our own residents is the right thing to do.

"It is now clear to everyone that the delay and the responsibility for this mess lies wholly with Hammersmith & Fulham Council. It is important to establish that not just for assigning blame. It is important because that is where the blockage lies. Hammersmith & Fulham have to play their part, as owners of the bridge, if things are to move forward.

"If they continue to refuse to play their part, then we reiterate our call for them to pass responsibility of the bridge from Hammersmith & Fulham to Richmond Council. The closure of the bridge impacts all of West London. But it acutely hits the daily lives of Barnes, Mortlake, and East Sheen residents. If we had been transferred responsibility for the bridge, as I offered over two years ago when I was Leader of Richmond Council, we would not be in this position today.

"It is time for us all to hold Hammersmith & Fulham Council properly to account. No more delay!"