Richmond’s Lib Dem Council chooses to hold its hands up on the introduction of the £12.50 ULEZ later this year - just like they have done on Hammersmith Bridge. 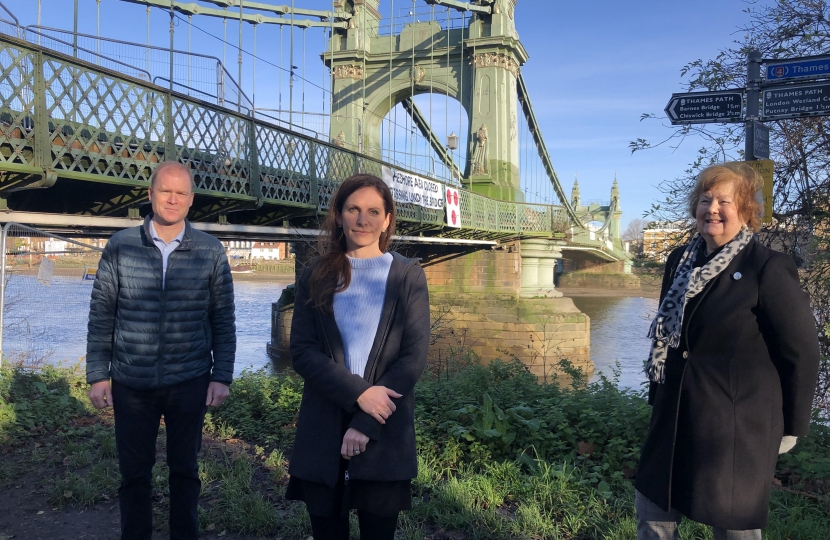 Richmond Borough Conservative Group have raised concerns about the planned introduction of the extended Ultra Low Emission Zone (ULEZ) in Richmond later this year, given the continued closure of Hammersmith Bridge.

At a Council meeting earlier this year, Richmond’s Conservative Group put forward a motion that would hold off the introduction of the ULEZ until Hammersmith Bridge is open again to vehicles, providing real transport alternatives. The Liberal Democrat administration, whose leader is now also running for the GLA, voted down that motion, and instead voted to do nothing.

The current ULEZ boundary is planned to run along the South Circular, creating a daily £12.50 charge for any cars driving in the zone that do not meet emissions standards. It is estimated that around 25% of residents’ vehicles in the borough do not currently comply with the standards.

The Conservative Group are committed to tackling local air quality and have been leading voices in the anti-idling campaign and in supporting the Government’s target of stopping the sale of new petrol and diesel cars by 2030. They also understand the huge impact of the closure of Hammersmith Bridge for residents and the impact of Covid and the Bridge Closure on local businesses. Their proposal is to ask TfL to divert the ULEZ boundary along the river Thames effectively removing Richmond Borough from the zone until Hammersmith Bridge is repaired.

The proposed ULEZ expansion will also put the tip and the crematorium into the zone.

Cllr Aphra Brandreth, Conservative councillor for Barnes Ward said, “The closure of Hammersmith Bridge has caused chaos for residents who now struggle with journeys for school and work, and to access hospital appointments.

“Introducing the ULEZ now, when so many of our residents who are affected by this charge are limited so significantly in their transport options, means that this charge no longer becomes an incentive to move to cleaner vehicles but rather a tax on our residents whom TfL have already failed so monumentally by their lack of progress on Hammersmith Bridge.

“Residents now cut off from Hammersmith and its transport links with the underground station have had to fight and beg for every bus that we can in order to still access vital public transport networks, this is simply not the right time to further isolate our community.

“We all want to support improvements to our air quality but this proposal gives our residents time to adapt, takes account of the unprecedented situation with the closure of Hammersmith Bridge, and stops a charge which will split our borough in two. Hammersmith & Fulham Council are now saying the bridge could be open to buses in 2022. If that is true, then we don’t have long to wait. ”

Cllr Paul Hodgins, Conservative Group Leader on Richmond Council said, “Unfortunately the Lib Dem leader of the Council and lead on Transport both live in Twickenham where they will not be impacted by the ULEZ, and seem content to simply let our residents pay the higher charges while their transport alternatives have been severely limited.

“Just like with Hammersmith Bridge, the Lib Dem leader of this council is not prepared to stand up to Labour led TfL and Labour run Hammersmith & Fulham Council because he doesn’t want to risk losing Labour votes for his GLA campaign. He has avoided the issue of the ULEZ expansion leaving our residents to suffer to advance his political campaign.

“We expected at least to see some support for lower income residents impacted by the ULEZ in the Lib Dem’s recent budget, but they have provided nothing, other than a huge Council Tax rise of 4.65%. The fact that the Lib Dem administration are not even willing to consider solutions which would take account of the challenging circumstances for our residents, highlights yet again that this administration puts their own interests first.”